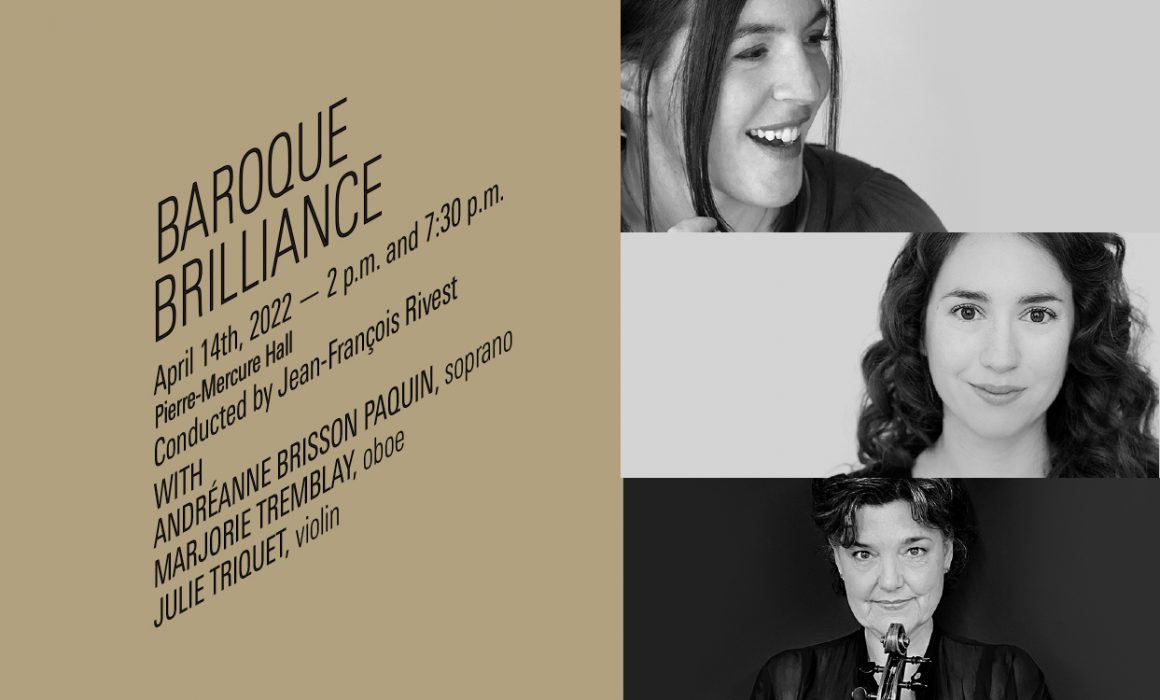 Montreal, March 25th, 2022 – I Musici de Montreal Chamber Orchestra is happy to present a baroque program featuring Andréanne Brisson Paquin (soprano) in a few excerpts from Handel’s opera. She will be accompanied, a few times throughout the concert, by Marjorie Tremblay (oboist) and Julie Triquet (the orchestra’s solo violinist). The concert will take place on Thursday, April 14, at 2 pm and 7:30 pm, at the Pierre-Mercure hall of the Centre Pierre-Péladeau. A webcast version of the concert will be available from April 21 to May 8.

« Everyone loves baroque music for its sophistication, beautiful harmonies, and moving solos. For Eastertide, we have programmed exceptional excerpts from Handel operas sung by the wonderful Andréanne Brisson Paquin and some of the most popular works from the baroque era. Who isn’t familiar with Pachelbel’s Canon by now? » – says Jean-François Rivest, conductor and artistic advisor.

Marjorie Tremblay has held the position of second oboe at the Orchestre Métropolitain since 2008. She regularly joins several Quebec ensembles, including Les Violons du Roy, with whom she has performed in the largest venues in Europe and in the United States, such as the Berlin Philharmonic and Carnegie Hall. A dedicated educator, she teaches oboe at Collège Notre-Dame in Montreal.

From April 21st to May 8th: webcast

Founded in 1983 by Yuli Turovsky, the I Musici de Montreal Chamber Orchestra is composed of 15 exceptional musicians, whose varied repertoire spans from the 17th century to present day. Jean-François Rivest, a renowned artist and educator, has been the conductor since January 2021. I Musici de Montreal interprets and promotes original programming based on discovery, tradition, originality and innovation in classical music.