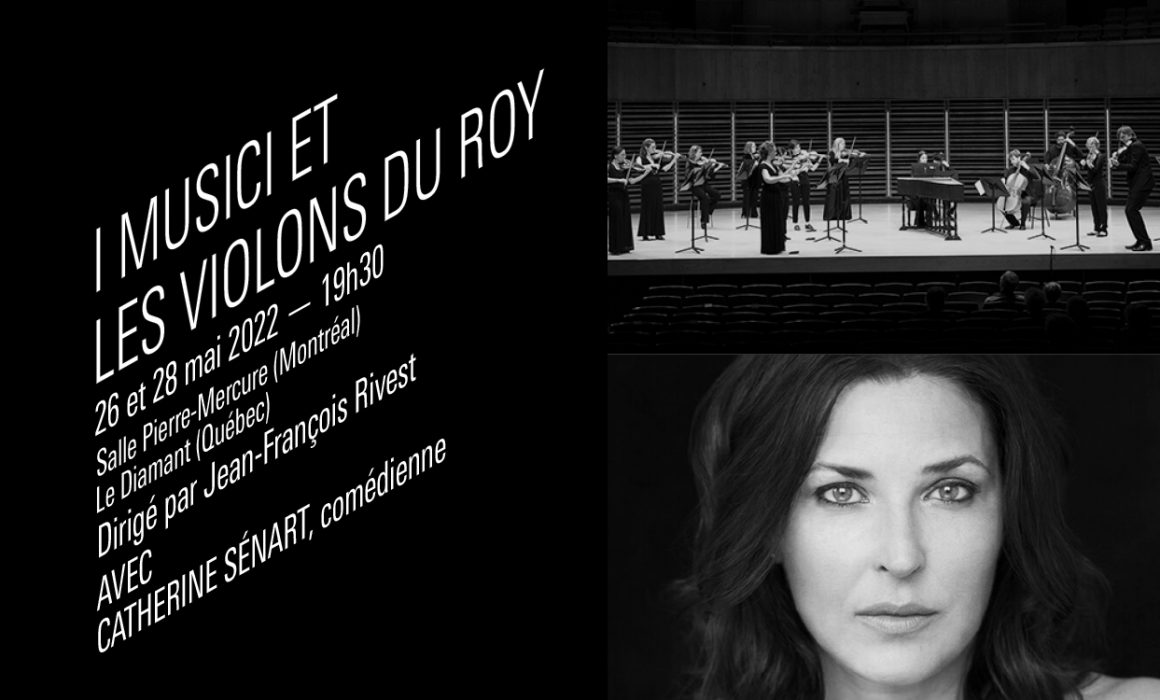 Montreal, April 27, 2022 – The I Musici de Montreal chamber orchestra is very proud to present its last concert of the season with the Violons du Roy, on Thursday, May 26, 7:30 p.m., Pierre-Mercure Hall in Montreal and Saturday, May 28, 7:30 p.m., at the Diamant in Quebec City.  Actress Catherine Sénart will also join the musicians in this concert, which will then be available as a webcast from June 2 to 12.

Under Jean-François Rivest’s conductor baton, the two orchestras will perform works by Corelli and a creation by Montreal composer Stacey Brown “Où la nuit”. During Transfigured Night, Catherine Sénart will add her own touch by reading a poem by Dehmel on which this piece by Schoenberg is based.

“A larger number of string players makes it possible to perform works that our ensemble could not play on their own, in particular Schoenberg’s Transfigured Night, one of the most poetic and Romantic pieces among the repertoire. Transfigured Night was based on a poem by Richard Dehmel, telling the story of a love relationship that turns souls, anxiety, and darkness into peace and light. Our collaboration will work perfectly for Corelli’s Concerti grossi, as this work benefitted from a large orchestra. You will hear the Concerti grossi in all their brilliancy with our orchestra and the Violons du Roy, topped with a bass continuo made up of harpsichords, organ, guitars, and archlutes.” – says Jean-François Rivest, conductor and artistic advisor.

Catherine Sénart has been working in theatre and television for more than two decades. She was seen playing Marguerite Volant in Radio Canada’s eponymous historical television series. She played in Les bracelets rouges, Épidémie, La Promesse, O’, Mon Meilleur Ami. In cinema, she plays Fabiola, in Pieds nus of Francis Leclerc and participated in the film of Yan England, Sam. On stage, Catherine sings as much as she plays; from Eliza Doolittle (My fair lady) to Berthe in Les Filles de Caleb and Stéphane Venne to whom she paid tribute in a solo show.

Founded in 1983 by Yuli Turovsky, the I Musici de Montreal Chamber Orchestra is composed of 15 exceptional musicians, whose varied repertoire spans from the 17th century to present day. Jean-François Rivest, a renowned artist and educator, has been the conductor since January 2021. I Musici de Montreal interprets and promotes original programming based on discovery, tradition, originality and innovation in classical music. 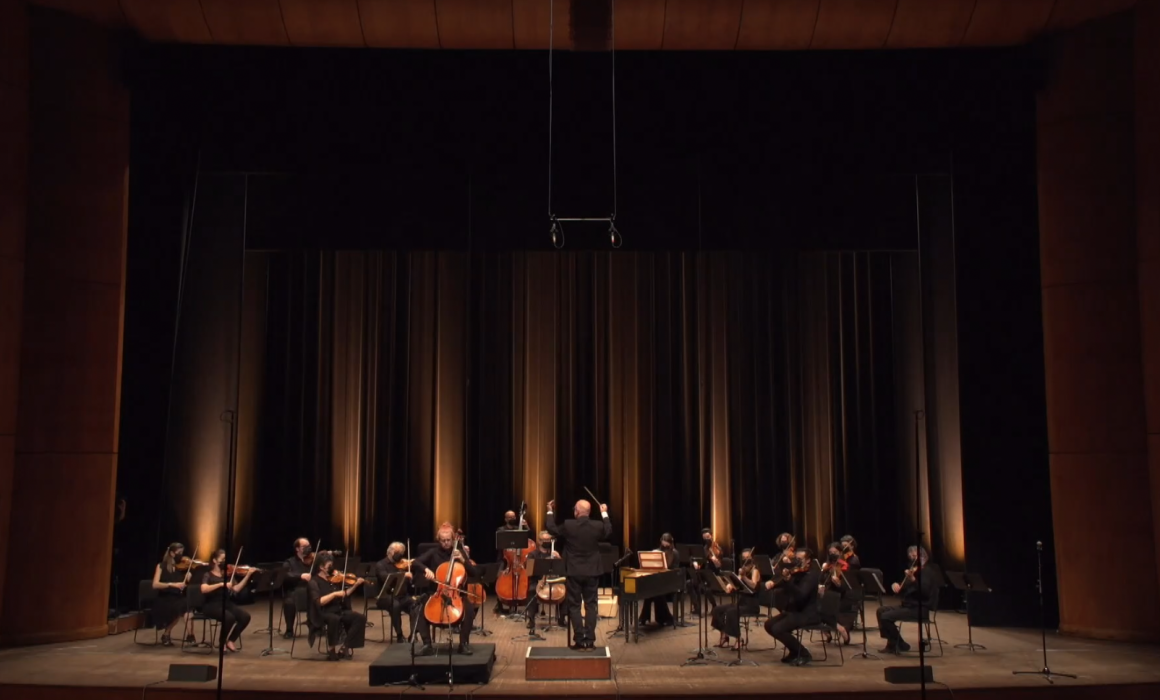 Montreal, February 25, 2022 – Following a very successful first edition of the I Musici Challenge, the I Musici de Montreal Chamber Orchestra is once again inviting young musicians based in Quebec and aged 5 to 25, to challenge themselves, regardless of their instrument! This event is an invitation to surpass oneself, to showcase perseverance and to share a passion for classical music. The deadline to participate is May 1, 2022.

All young musicians aged 5 to 25 who practice a classical musical instrument are eligible. It is possible to participate as a soloist (with or without accompaniment). String ensembles of up to four people are also accepted. To participate, simply record a short introduction video and a musical piece (or excerpt) for up to eight minutes.

Participants will have the chance to join the Friends of I Musici, a select group that receives exclusive promotions throughout the season. Those named Favourites will receive special tickets for the next season and some will be invited to play in the context of an I Musici concert.

All details to register can be found here: https://imusici.com/en/i-musici-challenge/

In 2021, twenty apprentice musicians were awarded the Favourites mention in four categories: Piccoli, Primary, Secondary and Cégep. At a concert presented at the end of the last season, the four soloists chosen at the Cégep level had the chance to perform works by Telemann, Bach, Haydn, Piazzola and Rimski-Korsakov while the five winning soloists of the High School level were added to the orchestra to close the concert with Tchaikovsky’s Serenade.

Montreal, January 12, 2022 – As a result of health restrictions that are putting a strict hold on all the cultural activities at the beginning of this year, the I Musici de Montreal Chamber Orchestra will continue its season with the special presentation of two concerts which will be available by webcasts only. From February 3 to 20, the concert will feature Montreal virtuoso violinist Sheila Jaffé, while Stéphane Tétreault’s concert will honour Yuli Turovski’s legacy from February 17 to March 6.

“Although we have to cancel our next two in-person concerts (January 27 and February 10), it remained important to us to continue to offer our audience the opportunity to appreciate the work of our chamber orchestra by giving them moments filled with softness, in what feels like a difficult start to the year. That is why we are very pleased to be able to offer them the webcast of the two concerts.”

In Virtuosic Women, you will be amazed with Sheila Jaffé playing the the Gypsy Airs by Sarasate and the marvellous variations on the themes of the opera Carmen. Works by Janáček, Dvořák and Quebec composer Linda Bouchard will complete the program. Replacing guest chef Nil Venditti, the concert will be conducted by our talented and dynamic artistic advisor and first guest conductor, Jean-François Rivest. The webcast of the concert will be available from February 3 to 20.

In Stéphane Tétreault and Yuli’s legacy, our long-time collaborator of the company will pay tribute to the cellist and founder of the orchestra, Yuli Turovski, who was the heart and soul of I Musici of Montreal for more than 25 years. After the Haydn part, the program, conducted by Jean-François Rivest, will make way for the famous string quartet Death and the Maiden by Schubert, in which vertiginous techniques go hand in hand with great romanticism. The webcast of the concert will be available from February 17 to March 6.

Founded in 1984 by Yuli Turovsky, the I Musici de Montréal Chamber Orchestra has been sharing its passion for classical music for over 35 years. The 15 exceptional musicians who make up the orchestra bring to life a varied repertoire ranging from the 17th century to the present day, accompanied by their principal guest conductor and artistic advisor Jean-François Rivest. With a program based on tradition, originality and innovation, the Orchestra stands out for the place it gives to numerous emerging and renowned artists with whom it partners to offer you a colorful and meaningful musical experience.